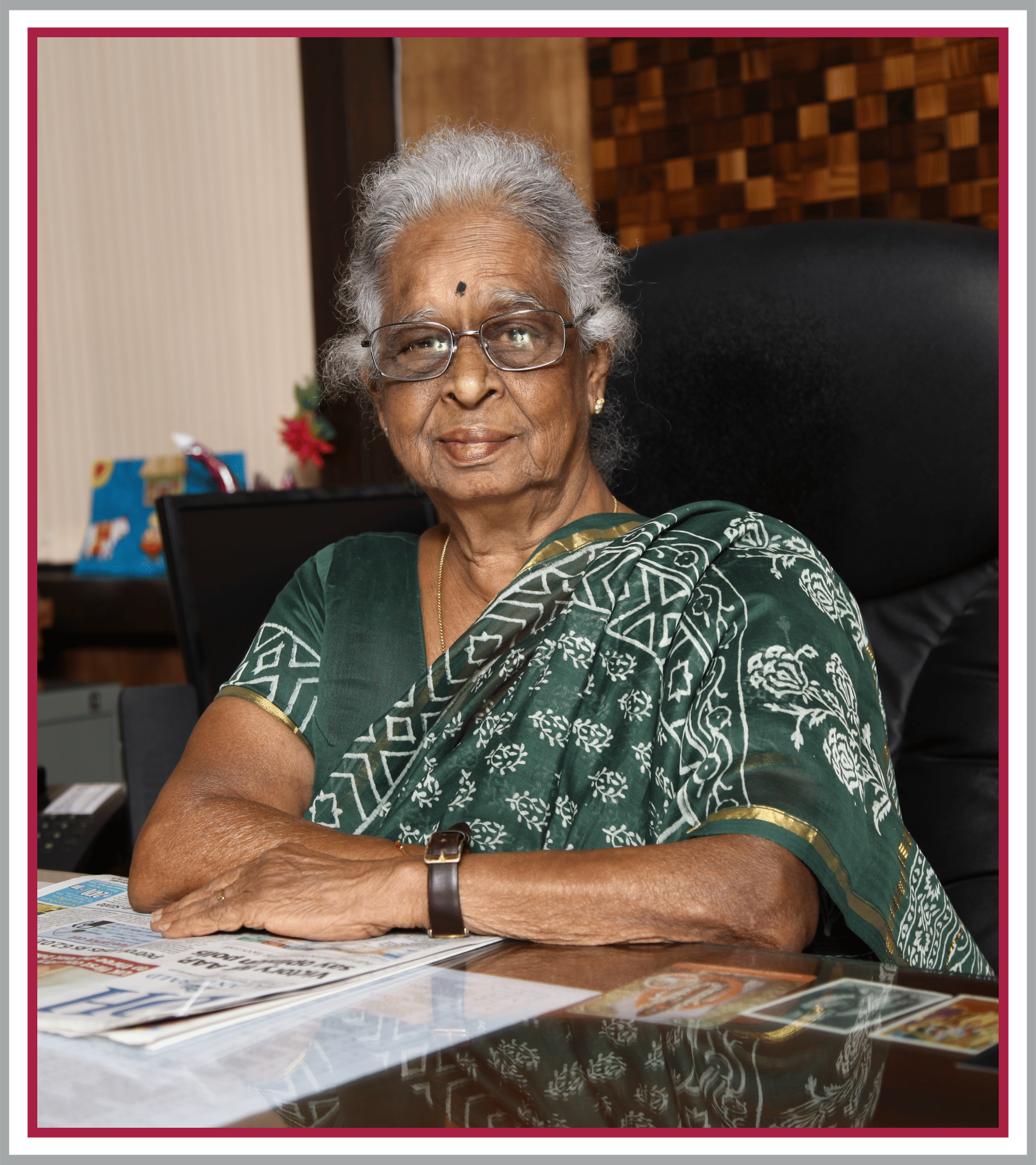 While our Founder Mother's death left an unfillable vacuum for the institute, it was her daughter, Smt. Meenakshi Balakrishnan, who took on the responsibility of carrying on her legacy. She is affectionately referred to as 'Mother.'

Smt. Meenakshi Balakrishnan took over as principal immediately following her mother's death, despite having no prior academic experience. That didn't stop her from pursuing her mother's dreams. In the process, she made valuable contributions to ensure that children at the Sri Kumaran Group of Institutions received a balanced education.

Mother's life experiences and travels influenced her approach to her role at the Kumaran institutes. Born in 1934, she witnessed her mother Smt. R. Anasuya Devi overcome several hurdles and establish the school. Her personal journey was no exception. In 1955, she married Shri G.S. Balakrishnan and travelled the world with him because of his work. Mother had the opportunity to spend three years each in Sweden, the United States, Indonesia, and Switzerland (Geneva). She also travelled to the Netherlands and the Maldives while Shri G.S. Balakrishnan was stationed there.

These journeys did not deter her from following her own aspirations, and she amassed a slew of honours. Smt. Meenakshi Balakrishnan earned a Bachelor of Arts degree from Delhi University by correspondence while living in Geneva with her husband in 1968. She graduated from R.V. Teacher's College in Bangalore with a B. Ed degree in 1974. She earned a postgraduate degree in political science from Bangalore University in 1977. While in Washington, D.C., she also took a secretarial course.

Smt. Meenakshi Balakrishnan gained great job experience throughout her time overseas. From 1960 to 1963, she was in charge of Indian students on government scholarships at the Embassy of India in Washington, D.C.'s Education Department. She worked as the Assistant to the Bureau Chief of The New York Times in New Delhi from 1966 to 1968. When they were in Geneva for an international conference in 1972, she briefly worked with the late Vikram Sarabhai, Director of Atomic Energy Establishment, and Shri P.N. Haksar, Secretary to the Prime Minister.

When Mother took over, the primary focus of the schools was academics. She, on the other hand, believed that a well-rounded upbringing necessitated extracurricular activities. Under her direction, the schools began offering music, dance, and theatre lessons to help students polish their skills. She encouraged them to showcase their abilities and skills even outside of the school grounds by participating in inter-school competitions. Students from the Kumaran schools excelled at quizzes, sports, and other extracurricular activities over time. The Students' Editorial Entity of Kumarans ( SEEK) was established under her supervision. This group is presently in charge of editing and producing the school magazine as well as arranging inter-school competitions. She believed that students needed to be involved in a variety of activities in order to recognise their own potential and polish their leadership skills. Like her mother, Smt. Meenakshi Balakrishnan thinking was ahead of the times. In 1985, she established a resource room for children with special needs, Sadhanam, in collaboration with the Spastics Society director Rukmini Krishnaswamy.

Smt. Meenakshi Balakrishnan’s as the Principal and later as Director of the institutions wasn’t only limited to introducing extracurricular activities, but also expanded to academics. She advocated for teachers to keep up with the times by introducing new ideas and instructional approaches. While she was known to be a perfectionist and a disciplinarian, she was also known for being compassionate and exceedingly helpful, always concerned with the health and well-being of everyone who worked at the Kumarans.

Mother served the Kumaran group until her passing on October 1, 2015. She had her own ideas in addition to carrying on the Founder Mother's dreams. She had hoped to establish an old age home near the school. This is a wish that her daughter, Smt. Deepa Sridhar, who is currently the Director, hopes to realise in the near future.